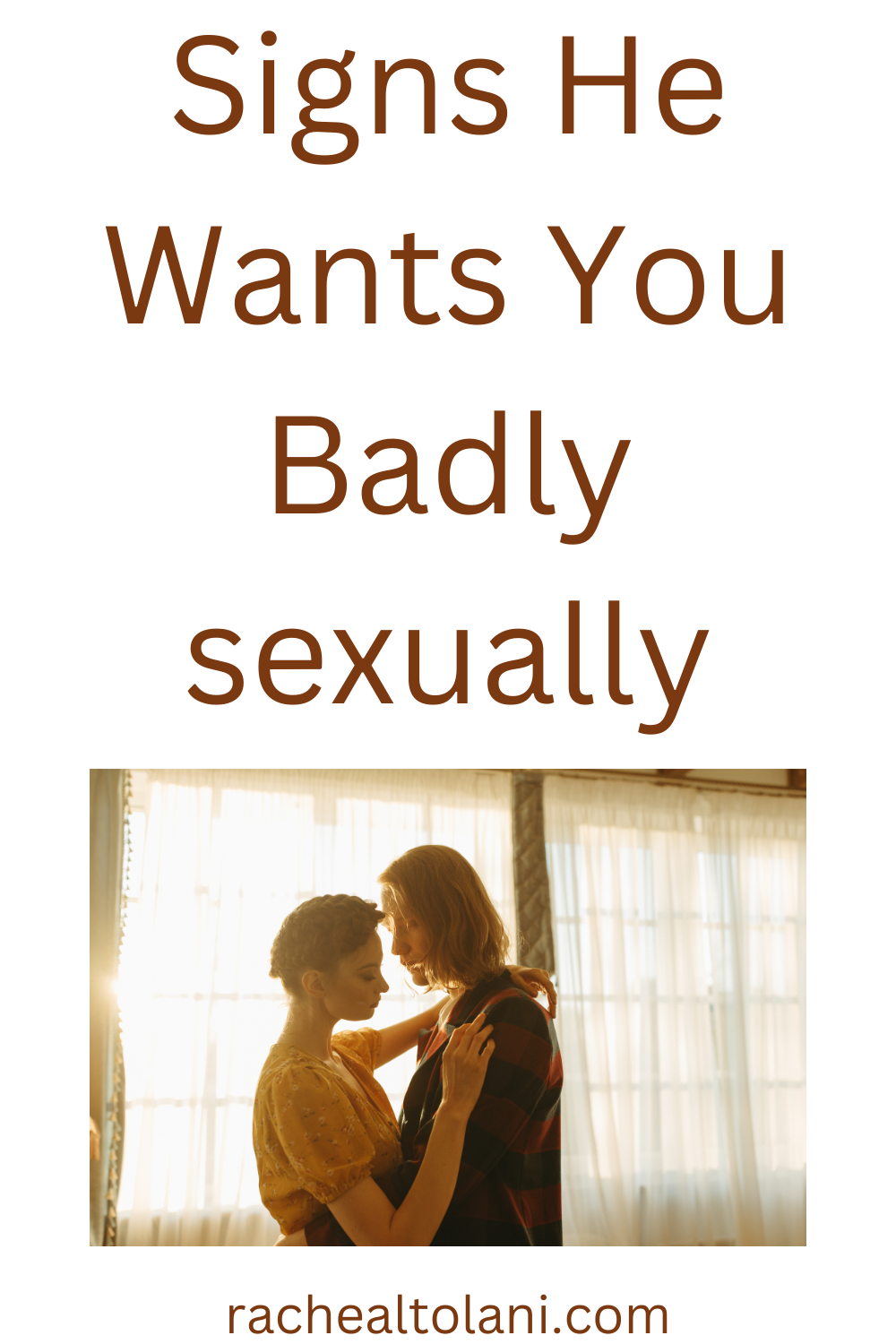 We’ve all been there. You meet a guy and you hit it off, but you’re not sure if he’s interested in you sexually. Is he just being friendly, or does he want something more? Signs on how to tell if he wants you badly sexually are interesting to know. Of course, every guy is different, so it’s not always easy to tell. However, there are some signs that may indicate that he wants you badly. Read on to find out what they are.

You meet a guy and you think he’s really cute, but you’re not sure if he’s as into you as you are in him. Is he flirting with you? Or is he just being friendly? It can be tough to tell, but there are some definite signs that he wants you sexually. If you see any of these signals, chances are he’s interested in you more than just friendship.

Signs he wants you in bed

It can be tough to tell whether a guy is interested in you sexually, or whether he just sees you as a friend. After all, most guys aren’t going to come right out and say “Hey, I want to have sex with you!”. But there are some subtle (and not-so-subtle) signs that he’s interested in getting busy with you between the sheets.

Here are a few of them

1. He can’t keep his hands to himself

If he’s constantly touching you when you’re talking or standing close to you when there’s no need for him to be. It’s a pretty obvious sign that he’s attracted to you. He might try to play it off as accidentally brushing your arm or “accidentally” getting too close. But if it happens repeatedly, it’s definitely not an accident.

Moreover, One of the most obvious signs that a guy is interested in you sexually is, if he can’t keep his hands off you when you’re around him. If he’s constantly touching your arm or leg, or if he tries to hug or kiss you whenever he gets the chance. It’s pretty safe to say that he wants to take things to the next level.

When you walk into the room, does his gaze lock onto you and follow you around? Does he find excuses to make eye contact with you? If so, he’s probably interested in you. It could just be good manners but if he looks away quickly when you catch him staring. The chances are he was checking you out.

3. His body language is telling

Body language is a dead giveaway when it comes to attraction. Is he leaning in when you talk? Smiling a lot? Making lots of eye contact? If so, those are all good signs that he’s interested in what you have to say and in you.
In contrast, if he’s crossing his arms or legs away from you, avoiding eye contact, or generally seems closed off. He might not be so into you after all. Its one of the signs on how to tell if he wants you badly sexually.

Doing things for someone usually indicates that we care about them and want to make them happy. So if he goes above and beyond for you (even if it’s just little things), chances are good that he likes you. Whether it’s holding the door open for you, offering to buy your coffee, or even just remembering your favorite ice cream flavor. These thoughtful gestures add up and can be a great indication that he cares about making a good impression on you.

5. He Compliments Your Appearance A lot

If he’s constantly complimenting your appearance, it’s a pretty good sign that he finds you attractive. He might compliment your smile, your eyes, your hair, or your outfit. Whatever it is, if he’s giving you compliments all the time, it means he likes what he sees.

6. He Asks You Personal Questions

When he’s interested in you sexually, he’ll want to know more about you on a personal level. He might ask about your family, your hobbies, or your hopes and dreams. He’s trying to get to know you better. So that he can see if there’s a potential for something more between the two of you.

7. He Gets Jealous Easily

If he gets jealous when you talk to other guys or when you mention another guy in a conversation. It means he cares about your attention and wants to make sure you’re only focused on him. This type of jealousy is usually a sign of sexual interest.

For example, if he gets mad when you talk to other guys or if he doesn’t like it when you go on dates with other people. it could be because he wants you all for himself. In his mind, if you’re dating other people or even just talking to them. That means that there’s less of a chance that you’ll end up in bed with him. So if he’s getting jealous easily, it’s probably because deep down. All he wants is to be alone with you sexually.

If he’s always brushing up against you or touching you “accidentally”. It’s a pretty clear sign that he wants to be physical with you. He might also try to hug you or kiss you without any warning. If his hands always seem to find their way to your body. There’s a good chance he’s interested in more than just friendship. Its one of the sure signs on how to tell if he wants you badly sexually.

Although shyness and neurodivergent traits can make eye contact difficult for some men, most will show desire with frequent and intense eye contact. He’s not looking away.

9. He Talks About Sex Often

If sex is always on his mind, it means he’s probably thinking about having sex with you too. He might make crude jokes or comments about sex, or try to steer conversations toward topics related to sex. If this is something he does often, it’s a pretty big sign that he wants to take things to the next level with you sexually.

When a guy is constantly talking about sex when you’re around him. It’s another pretty clear sign that he wants to get busy with you. He might make crude jokes, and talk about his own sexual experiences. Or bring up sex in other ways whenever he gets the chance. If this is happening, it’s likely that all he can think about is getting you into bed.

10. He Always Wants To Hang Out One-on-One

If a guy always wants to hang out one-on-one instead of in group settings, it’s usually because he’s interested in something more than just friendship. After all, if all he wanted was your company, why wouldn’t he want to include your friends in the fun? So if a guy always wants some one-on-one time with you. Odds are good that what he’s really after is sex. Its another signs on how to tell if he wants you badly sexually.

11. He Tells You What He Wants to Do to You In Detail

This one definitely falls into the “not-so-subtle” category. If a guy tells you exactly what he would like to do to you sexually, there’s no doubt about it. He wants you badly! Whether he’s telling you what position he would like to try out or describing a particular fantasy he has. If he’s sharing this level of detail with you, it means that he’s really thinking about sleeping with you.

Subtle signs to watch out for

The only way to really know for sure if a guy is interested in you is to ask him directly (although that can be nerve-wracking!). However, these signs can give you a pretty good idea of whether or not he wants you badly. So keep an eye out for them next time you’re talking to a guy and see where things go from there.

If you’re wondering whether or not a guy is interested in you sexually, these are some key signs to look for. If he frequently compliments your appearance, asks personal questions, gets jealous easily, tries to make physical contact often, or talks about sex often. The chances are he wants to take things further with you sexually. Of course, every guy is different so don’t take these signs as absolutes. But use them as guidelines to help give you a better idea of what his intentions might be.

If any (or all!) of these signs sound familiar, there’s a good chance that the guy in question is interested in having sex with you. Of course, only YOU can decide whether or not you want to take things to the next level with him. But if you’re looking for a sexual partner and not just a friend, these are some good clues to look out for.

Also read: How To Get Back At Your Ex-Boyfriend Quickly