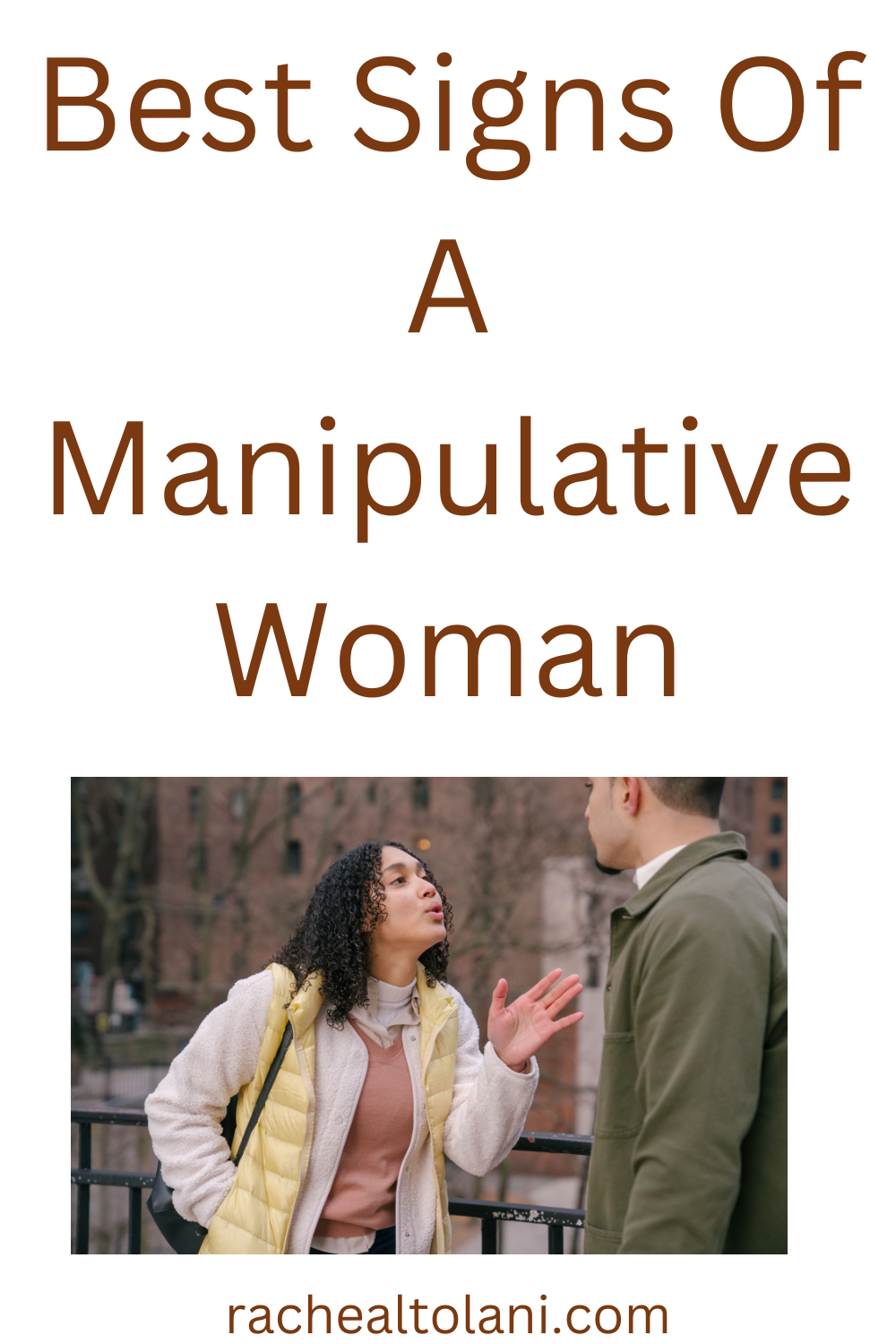 Manipulation is a type of behavior that seeks to control another person without their permission. It’s important to be aware of the signs of manipulation so that you can protect yourself from potential abusers. In this article, we will look at what manipulation looks like in women and how to identify it.

Being in a relationship with someone who is manipulative can be draining and emotionally damaging. It’s important to know the signs of manipulation so you can spot it before it causes too much damage.

How To Spot A Manipulative woman

Manipulation is often subtle and difficult to recognize. One common sign of manipulation in women is controlling behavior. A manipulative woman may try to control her partner’s behavior by making demands, issuing ultimatums, or withholding affection if she doesn’t get her way. She may also use guilt trips or emotional blackmail as a way of getting what she wants from her partner.

Manipulative people, regardless of gender, often disguise their true intentions under the guise of kindness or concern. As a result, it can be hard to tell when someone is trying to manipulate you or not. In this blog post, we’ll look at some of the signs that indicate a woman might be manipulating you and how you can protect yourself from her tactics.

Here are some signs of a manipulative woman that you should be aware of.

It’s one of the tricks that many women are using and they’re known for it. One of the subtle signs of manipulative behavior is a woman trying to burst out emotionally. She starts crying like a baby in the midst of a hot argument. Even though knowing that she’s the one at fault. But she wants to use the outburst to cover her mistake.

The moment they see that they’re about to lose an argument or the blame is shifting towards them, they get quite emotional. It’s one of the best signs of a manipulative woman.

Another sign of manipulation in women is passive aggression. Instead of expressing her feelings directly, she may use indirect tactics such as sarcasm, withdrawal, or blame-shifting to get her point across. This type of behavior makes it difficult for the other person to respond appropriately since they don’t know what the real problem is or what the woman actually wants from them.

Some women are very good at this. They will smoothly talk to you to do some things for them. For example, what you will never want to do under normal circumstances, you will do without realizing it. They can easily overturn your emotions to suit them.

A manipulative woman has a denial ability. She changes like a chameleon. When you challenge her with manipulative behavior. Before you know it she quickly shifts to being emotional. The whole argument will be in her favor. It’s another best sign of a manipulative woman that you need to watch out for.

Lying is one of the manipulative woman’s traits. They can lie without being ashamed of it anywhere. They can cook lies easily. They’re good at manipulating their partners to believe what they’re saying. Even though it’s obvious that they’re lying. It’s just about a matter of when, where, and how. Lying is in their DNA.

There being nice is temporal. When a manipulative woman needs your help, trust me, she can be extra nice. But immediately after she achieves what she wants, will return to her old personality. This is another clear signal of the best signs of a manipulative woman.

One of the signs of manipulation in women is gaslighting. Gaslighting is when someone manipulates another person into questioning their own reality or sanity by making them doubt themselves and their perceptions. A manipulative woman might do this by denying things that have happened or insisting that something never happened when it did occur. This type of behavior leads to confusion and makes it more difficult for the other person to stand up for themselves against the manipulator’s wishes.

Gaslighting is a form of psychological manipulation in which one person tries to make another person question their own memory and reality by denying facts or making false accusations. A manipulative woman might deny something she said or did in an effort to make you doubt your own recollection of events. She may also try to blame things on you that wasn’t your fault so that she doesn’t have to take responsibility for her actions.

A manipulative woman may try to paint a picture that what she says is true and what you believe isn’t. She may also twist your words or say things like “that never happened” when it did. If this sounds familiar, then the person in question may be manipulating you through gaslighting.

She Uses Guilt Trips to Get Her Way

One sure sign that someone is trying to manipulate you is if they use guilt trips to get their way. A manipulative woman might say things like “If you really loved me, you would do this” or “I can’t believe you don’t care enough about me to do this.” These phrases put the other person on the defensive and make them feel guilty for not complying with her demands.

She Plays the Victim Card

Another way a manipulative woman will try to get her way is by playing the victim card. This means she uses pity as a weapon against others in order to get what she wants out of them without having to take any responsibility for her actions. For example, she might say something like “It’s so unfair that I have been treated this way! Nobody understands me!” even though there may be valid reasons why everyone else isn’t complying with her demands.

They use their feelings as an excuse for why they do certain things or why they don’t have to take responsibility for their actions. For example, if a manipulative woman does something wrong. She might say it was because she was feeling emotional at that time and couldn’t help it. This allows her to avoid taking responsibility for her actions while still making excuses for them. Best Signs Of A Manipulative Woman

She Uses Silent Treatment as Punishment

The silent treatment is another common tactic used by manipulators as punishment for not doing what they want or as an attempt to gain power over someone else by withholding communication and affection until they comply with her wishes. If a woman tends to give you the silent treatment after an argument or disagreement, it could be a sign that she’s trying to manipulate you into doing what she wants instead of actually addressing the issues at hand in an open and honest manner.

Did your girlfriend make you feel bad always when you refuse to do what she wants? She makes you feel that you’re the worst boyfriend in the universe. She’s manipulating you. Even though, you know pretty sure that you’re doing your best for her to make things work. However, a manipulative woman will make you feel bad if you refuse to do things the way she wants them or follow her orders.

Manipulative people tend to be controlling as well, which means they want to control every aspect of their relationships. They may try to dictate who you spend time with, how much money you spend, or even how you dress and act in public. This kind of behavior should not be tolerated and is a definite sign that someone is trying to manipulate and control you.

A virtuous woman will be ready and willing to invest her best into the relationship.

Why some women are manipulators?

While some people can be manipulative in all kinds of relationships, women are particularly likely to use this tactic with their romantic partners due to traditional gender roles and expectations placed on them by society. It’s important to be aware of the signs of manipulation so you can protect yourself from potential abusers and maintain healthy relationships with those around you.

If you think someone might be manipulating you, reach out for help from an outside source so you can stay safe and build healthier relationships going forward.

Spotting the Signs of Manipulation in Women

No one deserves to be manipulated and it’s important that we all know how to recognize when someone is trying these tactics on us. So we can protect ourselves from them before it’s too late! Remember, if someone is using guilt trips, gaslighting, playing the victim card, or giving out silent treatments regularly. Then they may be attempting manipulation and should not be trusted with your feelings or emotions. It requires further investigation into the matter first.

It’s important to recognize the signs of manipulation so that you can stay safe from emotional harm. If any of these signs sound familiar, then it could mean that the person in question is trying to manipulate and control you without your consent. In this case, it’s best to remove yourself from the situation as soon as possible before any more damage is done. Everyone deserves respect and autonomy in their relationships, so make sure yours are healthy ones by recognizing any signs of manipulation early on.

Also read: Signs Of Feeling Lonely In A Relationship