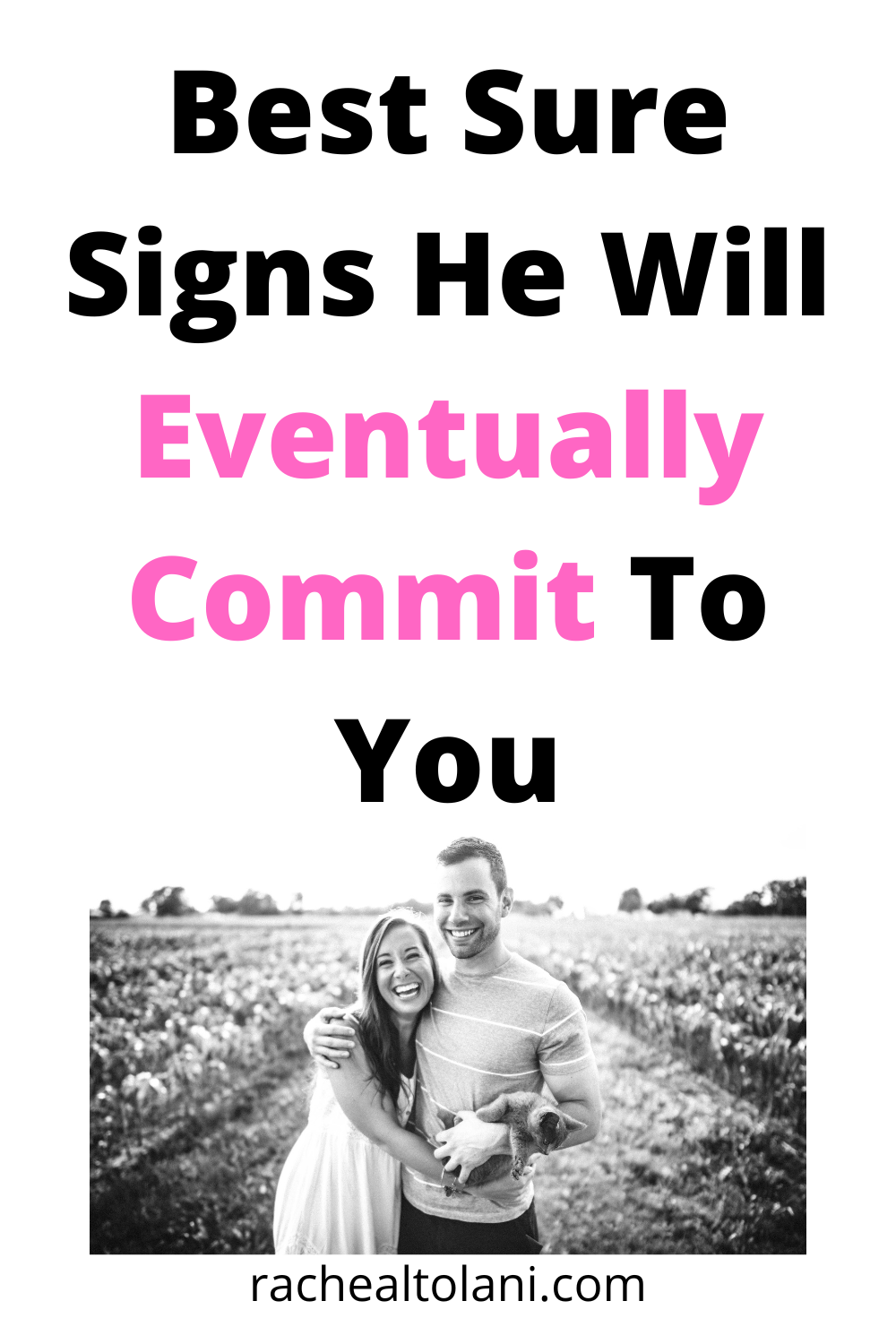 In every relationship, there is a mission. It’s either an ordinary crush or a lover that’s ready to commit. Because it’s not every guy that is ready to commit to a relationship. Every guy knows what they’re going in for, maybe just peck and go without leaving any mark or being wholeheartedly committed to a woman they love in a relationship. That comes to the question, how can you know if a guy is ready for a serious relationship with you? 11 sure signs to know he will eventually commit is very important so that you don’t want a guy that will waste your time.

You may be somehow curious and want to find out if the love your guy is displaying is enough for him to get committed to you. You desire a serious relationship, but it’s difficult to say if your guy is ready for such and you don’t really know how to evaluate him.

When he’s ready to commit, he shows signs. Some are more obvious, some less obvious.

Depending on your connection, he might be willing to commit after a while of knowing and connecting with you.

On the other hand, if he’s scared of commitment, then the story might have a different turn!

Why it’s important to know

There are some obvious signs that you will see that will indicate his interest and commitment to you. When a man is interested in a serious relationship with you, he will be doing some things that a casual boyfriend will never do.

You love being with him, he’s kind and you feel loved. That’s good but not enough to judge his seriousness and commitment.

Are you in the stage of friendship, dating, or at the initial stage of your relationship? whichever stage you may be, it will be interesting and essential to know if he’s serious and ready to commit. When you’re sure of his intention, you will not waste your time and resources on a guy that is not serious and you will greatly avoid heartbreak.

Because this happens a lot when you assume that he’s yours but he’s one leg in and one leg out. You cannot trust his commitment and eventually end up in depression. All these will be avoided when you know his mission in the relationship.

Here are some of the obvious signs that you need to pay attention to.

When a guy is ready for a serious relationship, he will be honest and willing to share his feelings with you. He will communicate with you freely without any fear or doubt. You can see his honesty in everything he does without any hanky-panky. He will be straightforward in his words and in deeds.

Sometimes many guys don’t want to open up completely with you. But a guy that is interested in you will even want to share his past. If he notices you’re the type he can fully confide in, it’s not difficult for him to share his feelings and personal things with you.

He is always available

A guy that prioritizes and values you will still find a way of making time for you even though he’s busy. It’s just a matter of planning and he will always include you in his schedule. So only a serious guy will do that because someone that does not give you his time will also be difficult to see when you need him most.

Someone that is ready to commit will put you first over his job and every other thing.

He is not ashamed to introduce you to everyone

One of the ways to know if a guy is ready for a serious relationship is, that he will be willing and want to introduce you to the people that matter in his life. He’s not ashamed to introduce you to his close friends and family. It is not every guy that is interested and wishes to introduce you, even you will be asking him when will you introduce me to your people. Some guys will tell you not now while some will keep on postponing it.

But a guy that is eager to introduce you means business. He values you and wants to build a serious relationship with you.

He always wants to impress you

When a guy is really serious with you, he will always want to impress you. He wants to always make you happy. He will like to show you his capacity and strength to create a good impression. A guy that is not ready for a serious relationship will never border to impress because he knows that he doesn’t have anything to offer.

He wants to trust you and not hide any secret

This is one of the best signs that he will eventually commit. Because the issue of trust plays a huge role in building a strong relationship. He will like to build that trust with you. He will tell you everything that you need to know about him. He will never hide any secret. He knows and respects the importance of trust and he doesn’t want to betray that trust. So he’s ready to open up even his dirty secret for you.

He pays attention to all your details

A guy that is not ready to commit will not pay attention to something that matters to you. Have you not seen a guy that tells you something you might have said joking a long time ago and you’re asking him, how did you know it? Someone that is ready for a serious relationship only does that.

He tries to remember every good and even the weak side of you in order to strengthen your relationship. Because everybody has two sides of the coin.

He keeps to his word

How to know if a guy is serious with you, he will be a man of his word. When he says he’s coming to you, he will, and if peradventure he can not make it. He will tell you the reason why. He doesn’t want to disappoint you and make you feel bad. He will not lie because he wants to be a man of integrity and wants you to trust him. When a guy can not keep to his promises, and always make excuses, so it means he doesn’t respect you and his feeling for you is not genuine.

Your advice and opinion matter to him

He values and respects you when he needs someone to talk to. Especially when he wants to take a serious decision in his life, he respects your opinion. He will like to take your advice seriously because you’re very important to him. Your voice count and matters to him. Whenever he has an issue, you’re the first person in mind that he thinks can give him a solution. That shows he’s ready to commit to you.

He will carry you along

When a guy doesn’t want to commit, he will never ask for your opinion on anything that concerns him. He will take some decisions and when you get to know later and ask him, some guys will tell you is not your business. You will definitely know your position in his life and that your relationship with him cannot go far.

A guy that loves you will always carry you along and involve you in any decision he wants to make. Because he wants to build his future with you.

It’s another sign that a guy is interested in you. When a guy is asking you about your future plan, he’s ready to commit to you. He’s asking fx which course you want to study, and when you want to marry. How many children do you want to have? These are very sensitive questions and only a guy that’s ready for a serious relationship asks that.

Someone that’s not ready will never ask you such a question because he will think it’s never his business. He’s not interested in your future, “he’s a Now guy never a future partner.”

He is lovable and affectionate

When a guy is ready to commit to a relationship, his affection towards you is different. He is ready to go to any length to make you happy and feel loved. He will show you love and affection in every area you can think of. He will demonstrate his true love both in words and in his action.

It’s good to know if a guy is ready to commit before you go too far. Commitment is a decision that comes from the heart. You cannot say you commit to a lady that you love and be doing what will make her always feel sad. Commitment and happiness go together. Commitment is one of the best ingredients for a strong and happy relationship. In order to build trust and long-lasting relationships, commitment is key.

Also read: 10 Things You Should Never Do In A Good Relationship

43 Ways On How To Compliment A Girl