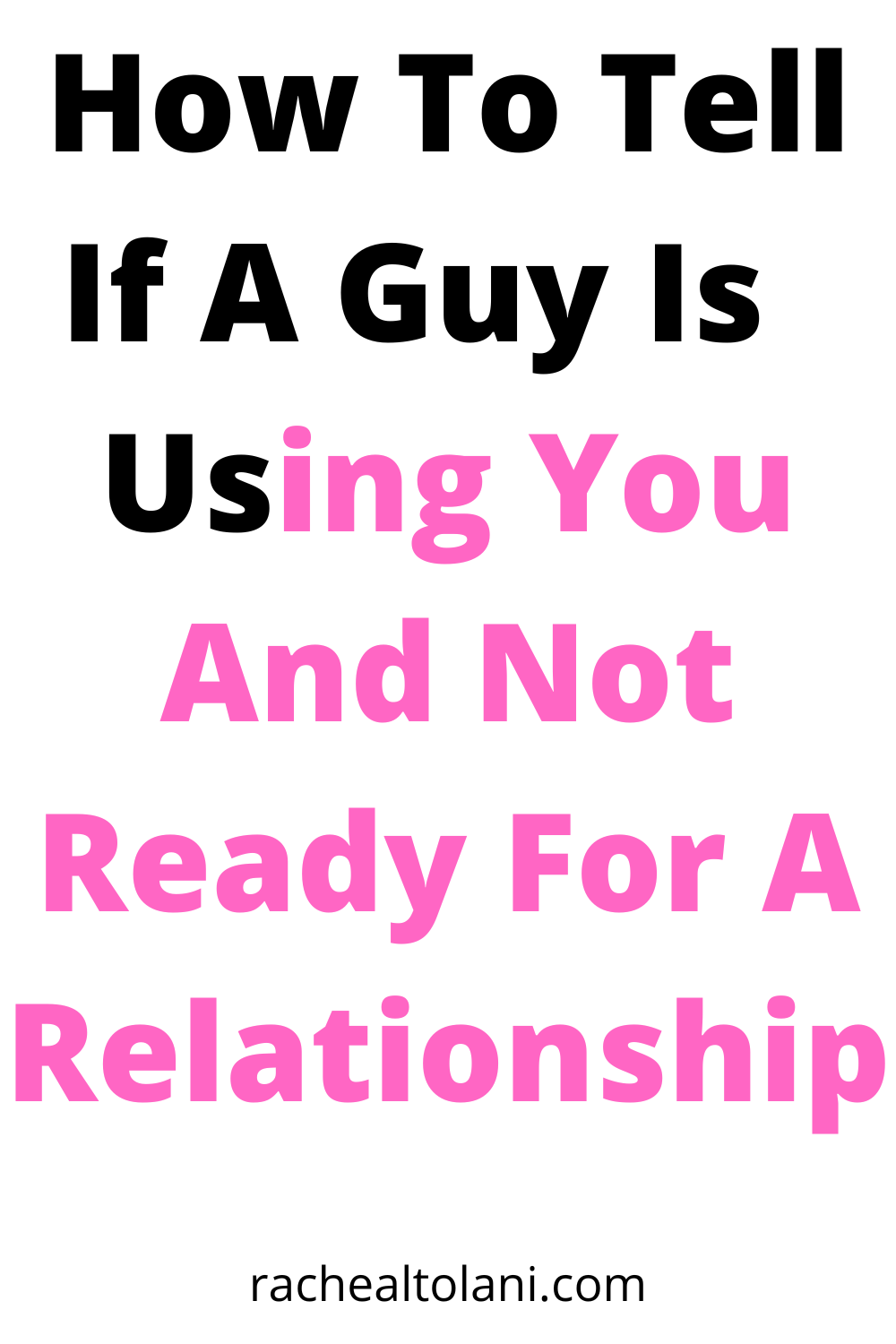 There are so many clear signs that tell you if a guy is a player and not a lover. Sometimes some guys show a red flag right from the first date but many ladies didn’t get it. This can be because of desperation and or high expectations. It is good to know if you’ve been taking for a fool and you need to realize this and stop it. 8 signs on how to know if a guy is using you are essential so that you can act accordingly.

Have you been feeling about having a serious relationship with a guy and it seems you’ve been a fool for a while? Has a guy shown you some attitude of negativity and you think it’s normal? Have you started a relationship and suddenly he doesn’t have interest again?

When a guy is doing all these things, he’s been taking you for a fool and you have to quit the relationship before he causes you more harm.

Here are some typical signs that a guy is not interested or ready for you.

He tells you he doesn’t ready for a relationship

Have you experienced this from a guy right from the first date? When a guy tells you that he’s not ready for a serious relationship but you still want to hang out with him. It’s a clear sign that he’s a player. Can you ask yourself what for? Even though he’s the type of your dream guy. Many ladies make this mistake, thinking things might change later or keep suffering in that relationship.

Since the guy has told you his mind, accept it and look for another guy that’s ready for a relationship. Because you cannot force a man to love you, love and affection should come naturally, then you will both enjoy the relationship.

He never makes his intention known to you

Have you been with a guy for a while? He’s always flirting with you 24/7 but has never told you his mission. He’s a player and if care is not taken, he will waste your time and a serious guy that is ready for a serious relationship will never come to you. They will think you’ve been engaged with him.

You might know him from school, church, or whatever, he’s always happy to be around you. He never invites you out, what can you call him, a friend or boyfriend? If he doesn’t come out straight means he’s not interested in you and he’s nothing but a player and time waster.

He doesn’t want to be in love

Some guys will like to use you as trial and error. They’re afraid to fall in love with you. Some will even say, I’ve never been in love, so I don’t want to be entangled with any woman in a relationship. Can we be friends? When a man is telling you this, he’s never interested in you but just wants to use you.

You will be thinking maybe you’re not the right woman for him. Your feeling alone will make you look like a fool, not good enough, and makes you sad. Why must you do this to yourself? This guy is not met for you, don’t let him use you and dump you. Even with his age, you can see that he’s not ready to settle down. He might be holding down with something you cannot see. Since you’re not a test kit, leave him and move on. 8 Signs On How To Know If A Guy Is Using You

He’s doesn’t have time for you but texts

There are a lot of online crushes these days. You’ve known him for years now and he’s always sending you text messages 24/7. You receive good pictures and love messages always. You need to watch out, so you don’t assume you’ve found your soulmate but a bunch of liars. Who knows he’s been sending the same messages to over thousands of lovers. Don’t be taken for a fool.

If a man is interested in you, despite you’ve met online, he will make time for you and come for a visit, so that you know who you’ve been chatting with or dating for real.

When a man he’s newly divorced and not yet healed

This is very dangerous when a man is newly divorced. He wants a companion, not a lover. Don’t be a fool or think you’ve met a lover. You never know what causes his separation or divorce from his ex. Some will say clearly their not ready for another relationship but just need someone at the moment. They only need someone they can use to while away the time. They only want to see how things will go, in their mind, nothing serious can come out of such a relationship. If you stay with such a guy, he will never propose to you but just enjoy your company.

You always make a move and motivate him

It’s always you that’s making the move on everything. It’s a sign that he’s using you and taking you for a fool. He has never invited you out, it seems you’re the one that is pushing him and he does things reluctantly. He’s not interested in you, stop it. Are you ever feeling like you’re a packing car and comes to you anytime he needs you? That’s an indication that he’s using you because he doesn’t value that relationship. I encourage you to learn from 8 Signs On How To Know If A Guy Is Using You

He doesn’t want to compromise

There is always a price to pay in any relationship. Each of you should be willing to compromise once in a while. It’s normal in a good and healthy relationship. But when it’s only you that is making a huge sacrifice and your guy is always having his way. Check it and be careful, he’s using you. There are some guys that say, I’ve told you I didn’t want a relationship but you push me. So you’re the one that will bear the consequences. When a guy is telling you this, open your eyes and enough of being a fool for him. 8 Signs On How To Know If A Guy Is Using You.

He’s expecting too much from you

When a guy is expecting so much from you it’s a sign of using you. For example, a guy wants you to respect him at all costs but he’s always disrespecting you. Meanwhile, respect is to be earned not a demand. He doesn’t care about how you feel. He’s treating you anyhow just because you love him.

You can do anything for him but when it’s your turn, then it’s a big deal for him. You’ve been taking for a fool because there must be a check and balance in a relationship.

These are some of the typical signs to tell if a guy is using you and taking you for a fool. You deserve to be loved and cherished. It is better to know on time if a guy is not ready for a relationship than to be in a prison of hope and regret it later. If these are all his attitudes toward you, then you need to reconsider your position in such a relationship.

Also read: 11 Sure Signs To Know He Will Eventually Commit

13 Best Ways On How To Find Your Soulmate