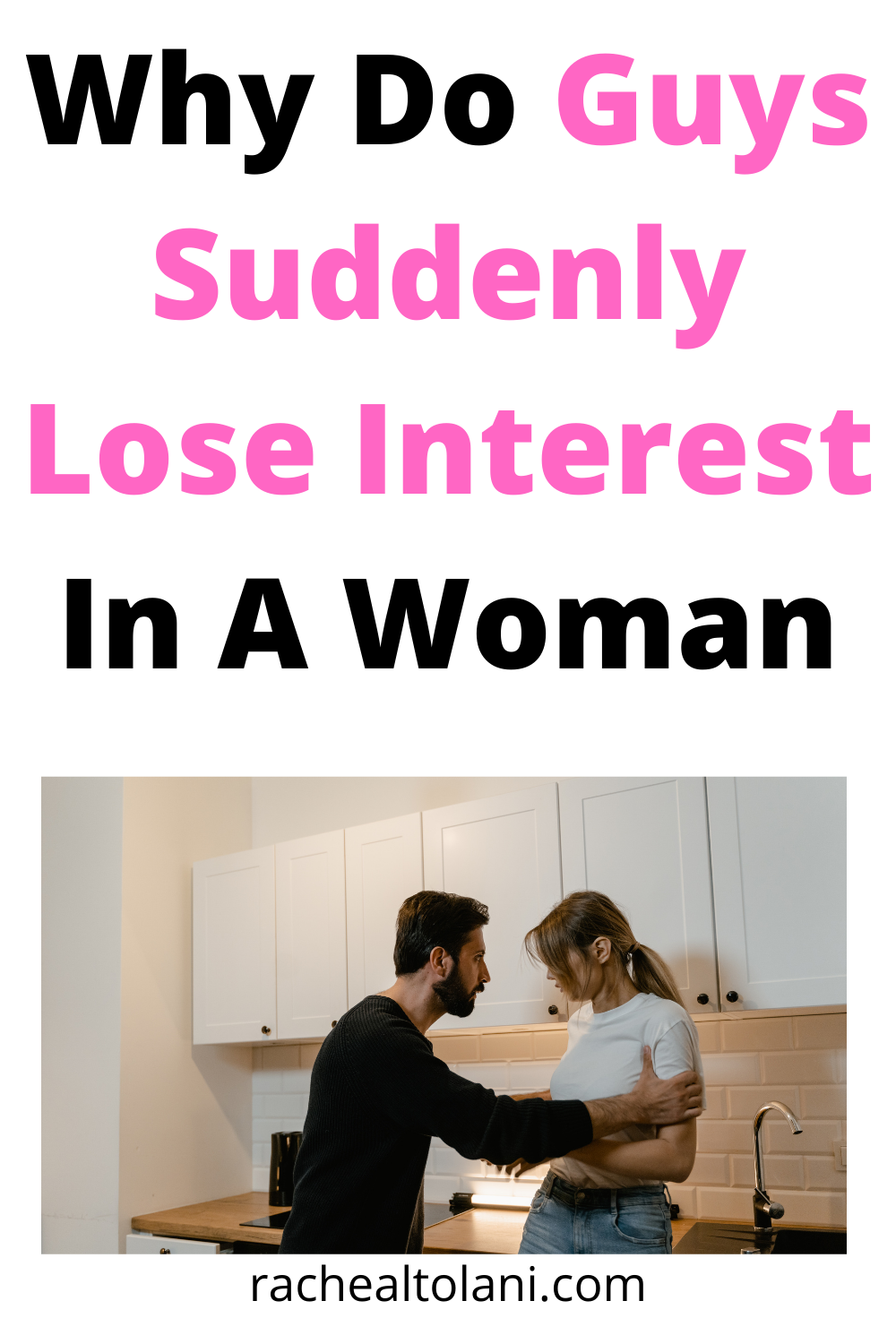 However, it will be better not to allow your guy to lose interest in the first place. But when you know why he can, then you can avoid those things or habits that can make your man lose interest in you.

When he gets bored

Guys generally love when there is much excitement in a relationship. Women are the ones that always bring that excitement even in marriage. Most women get carried away and relax after some time. In order to make your relationship very great and more fun, don’t feel too much comfortable and relaxed. Learn to be doing those things that your guy likes. Even though it takes both of you to make it work, guys want a woman that is creative in ideas and this makes the relationship sweeter and very interesting for your guy.

Men love when there are always things to make them happy and excited. They’re like a baby that needs something to activate their happiness. When that excitement is no more there, they quickly get bored and lose interest. This calls for action as a woman to know what makes your guy happy and excited, so he doesn’t lose interest in you. Excitement plays a huge role in the longevity of a relationship.

However, men love to be challenged, they don’t want things to be too slack. It helps them work harder and invest more to move the relationship forward.

He found another attractive woman

Sometimes this is the most common reason why guys suddenly lose interest in a woman. When they see another new attractive crush, of course, the interest in the old is no more there. Don’t forget those things you do that make you attracted to him at the beginning. It’s imperative to keep attracting him. Also, some guys lose interest when you’re playing a defense game with them. They will like to look for someone else that’s ready to open up to them.

When he’s not satisfied

When a guy is unsatisfied in so many ways, he can lose interest. Unsatisfaction is a joy breaker in a relationship. When a guy is not happy, the love will not be there because happiness and love go together. This can be in any form. It’s important to know what makes your guy feel loved and satisfied. Moreover having said that, there is nothing you can do to satisfy some guys even if you cut your head for them. He will still lose interest anyway.

Sometimes, the problem might not be you, but for you to satisfy him is just not possible. So this type of guy always uses this as an excuse to fall out easily and pursue another woman.

When he has chosen interest in his work over the relationship

This is also common in a relationship when a guy is interested in his career over you in the relationship. Some guys are always on their computers and even like to bring official work home to finish. This guy will take offense at every little thing and make him lose interest. If you dare complain, he will tell you don’t you want me to work? They’re like that because that’s their typical attitude.

If a guy likes you despite his career or tight schedule he will still make time for you. But this type of guy, don’t put pressure on him. Just try to communicate your feelings to him and see if maybe he will change.

When they feel too much pressure

Men don’t like to be under pressure from their women. They love to do things the way they want them. They tend to lose interest when this happens. As women in nature, we want our men to do something in our own way. Do you know that this pushes a lot of guys away from you? It makes them lose interest just like that within a short time.

So avoid mounting any pressure on him. Let him do whatever he wants to do of his own free will. This is one of the reasons why guys suddenly lose interest in a woman.

He doesn’t love you again

You might be wondering after the first date, he reacted coldly to you. You cannot really see what the problem is. Sometimes love at sight is what some guys see but when true love is not there. This makes him lose interest suddenly. Since you cannot force a guy to love you and when this happens, it’s like putting yourself in danger because he will never be faithful to you.

When he feels starved sexually

Do you always turn him down when he asks for sex? Are you using I’m tired as an excuse? Are you using sex as a weapon of punishment anytime you disagree? Men lose interest when this happens always. I did not say you can not be tired, of course, but is it always or you’re genuinely tired? He will understand when it’s occasionally but otherwise. Maybe you’re just doing it to avoid him.

However, we all know the importance of sex in a relationship or marriage. So When you’re denying him always will make him lose interest and disconnect from you.

When the love is based on what he wants

This is another reason why guys lose interest in a woman. When a guy loves you just because of his sexual urge, he will lose interest immediately after he must have slept with you. He doesn’t love you anyway at the beginning but some ladies fall easily into this trap. That tells us that you must not sell yourself too cheap to a guy before you know his mission.

Even though sexual intimacy plays an important role in a long-lasting relationship. But a good and healthy relationship does not base on sex alone. True love involves patience, trust, perseverance, and much more.

When his expectations are not met

It’s one of the reasons why guys lose interest in a relationship. It’s possible you’ve not been real at the beginning but suddenly changed. Ladies do hide some behavior for example during the early stage of dating. As soon as they know that the guy falls in love, some ladies begin to come out with their true colors. Many guys cannot tolerate those Cameleon attitudes. It gets them irritated and makes them lose interest immediately.

When his expectations are not been visible, he will like to quit the relationship.

Guys like a woman who is stable in character right from the beginning. He knows nobody is perfect but don’t be a fake person and try to be yourself at all times. When you work on each other’s weaknesses, you’re a perfect match for a long-lasting relationship.

When you are no more who you are, it makes guys lose interest in you. For example, you’re very humble, caring, and respectful before. But now you treat him like trash, you’re so rude and arrogant to him. You suddenly become authoritarian. When a guy sees that you want to dominate everything, he loses confidence and interest in you. Every man loves to be in charge no matter what.

Another sure reason why guys suddenly lose interest in a woman? No man wants a woman that will be toying him around. He wants you to give him that respect as a man you love and cherish.

When you nag always

Nagging is another best reason why guys lose interest in a woman they love. Men thrive well in a peaceful atmosphere. When you choose to nag at every little thing, it will make you lose interest in you. You need to overlook a lot of things in order to keep your relationship. Nag and love are opposite each other. When you nag always, it affects your bonding.

However, you can communicate what you want in a better way to your partner without nagging. Men like it that way than shouting and moody always in the house. Nagging habit makes you pick fight easily and peace will never reign in such an environment.

When you’re too desperate to settle down

Immediately you raise up any issue about a serious or committed relationship, it’s like you’ve committed a big offense because he’s never ready for such.

When you don’t take care of yourself anymore

Men generally love to see their women refreshed and take good care of themselves no matter their age. It’s good to take care of the house, children, and even your husband but don’t neglect yourself. Do you know that guys always react to what they see? Your man wants you to look presentable every time both in the house and outside. Men lose interest when you look untidy.

How to get a guy interested in you again

It is possible to get a guy interested in you again. When you notice his actions and you communicate effectively. If you really love him, it requires a lot of love, patience, and understanding. You’re also ready to change when you realize some of your faults. Some guys will open up to you about why he’s losing interest, maybe there are some things you’re doing if he loves you genuinely. He will like you to work on yourself. Then you can win his heart back.

What of when most of the problems come from the guy? can you make him interested again? Yes is still possible, if you love the guy. Even though it’s not going to be easy. It’s better said than done. Give him time and space, avoid the wrong assumption, and don’t push or press him. It will just complicate the issue and don’t write him off yet. He might change and even love you more than ever.

When you have a good guy as a partner or husband, you should do everything to keep your relationship. Make him fall in love over and over again with your action and let him go deeper in love every day. His love and interest for you will continue to flow like a river. The reason why I’m advocating for this is that women are the salt and sugar of our relationship and home. The ball is in our court, if we play it well, our men will never lose interest in us.

8 Common Excuses Guys Use To Make For Avoiding Commitment

2 thoughts on “Why Guys Suddenly Lose Interest In A Woman”