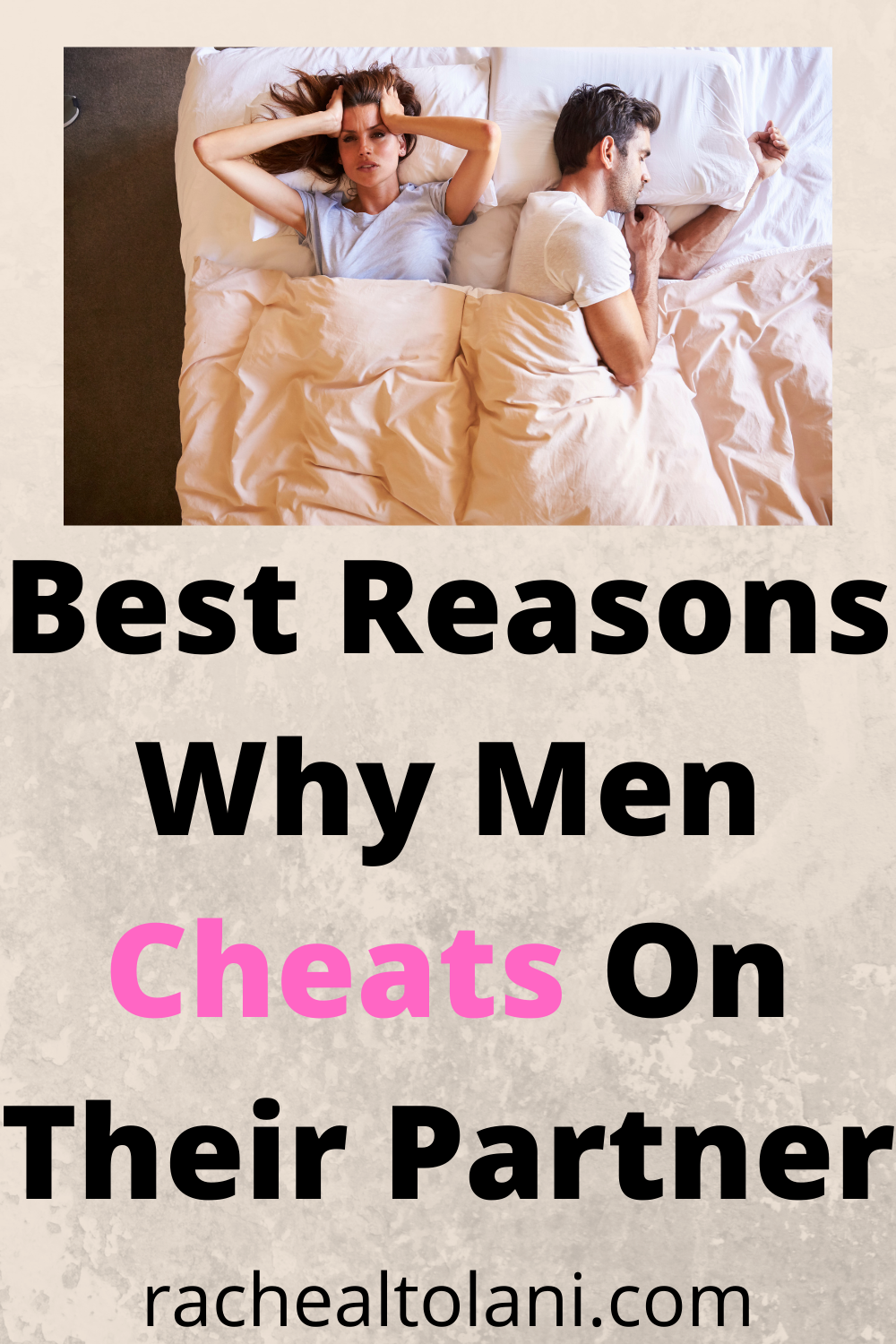 Those men that cheat just want to justify why they did so, but cheating is never the only option when there are problems in the relationship. This has contributed to the high rate of broken relationships and even marriages. The 15 reasons why men cheat on their partner is highly recommended.

It’s actually important to ask these questions and understand why men cheat. I can understand it’s not a good experience to be cheated on. Have you been cheated upon? or you just want to know how to prevent such an ugly incident not happening to you. It’s good because as an adage says, prevention is better than cure.

What are the reasons why men cheat?

Those women that have been cheated on many times in their relationship or marriage could rather conclude or have these questions in mind, is it all men that cheat? or is the majority of men cheating?

Do all men cheat?

The answer is no. I can understand how hurtful it can be, but it would not be justified to say that all men cheat. There are still a lot of good men out there that are faithful to their marital vows. Human beings generally have a strong desire to satisfy themselves. It’s not just about men alone, even though women also cheat the percentage is very low compared to men.

I have heard a lot of women complaining about why their husbands are having extramarital affairs. Wondering why married men cheat or why is this happening in their relationships/marriages? Meanwhile, there are a lot of questions that need an answer.

Here are some answers that will shed light on these heart’s burden questions.

This is a foundational problem because if parents are doing it, it’s most likely their children do the same except they’re been delivered. It takes the grace of God for such children not to follow the same pattern. These are the type of men that always says my spirit is willing but my flesh is weak, just because, it is in their DNA to cheat. Its runs in their family.

When some men want to belong to some category set of groups. They want to do what others are doing. Like an adage says, evil communications and bad company corrupt good manners. Some men are doing it because they want to socialize, even if it is against their own wishes. But when they see others doing it, they also want to blend with the norms. By doing so, they cheat on their partner.

They’re ignorant of their behavior even though is not an excuse to justify their immorality. Some men are cheating because they think that’s normal and everybody is doing it. They don’t know it is wrong to do so.

Lack of self-control makes some men cheat because they cannot just hold their lustful feelings for a moment. They always feel the urge for sex anytime they see a woman. They don’t know how to control their lustful emotions. Those men are called anything under a shirt, they never border whom they’re cheating with, whether old, young or even a prostitute. They’ve been addicted to sex.

Men who undergo counseling for sexual addiction learn why they abuse sex – including cheating – and with that insight can deal with past traumas and learn to emotionally connect with their spouse in a healthy way, therefore significantly reducing the likelihood of future infidelity.” Eddie Capparucci Counselor

When a man is not mature, he will cheat on his partner. When a man lacks the maturity that is required that makes him invest quality time, commitment, and knowledge of how to resolve conflicts in his marriage or relationship. It’s another reason why most men cheat.

Because when there is no peace at home, they will be looking for a substitute somewhere else to cool themselves down. They need someone to feel the intimacy gap that is open for them.

I can understand that some women push their men to cheat on them. When a man does not satisfy sexually with his wife, they are tempted to get it from someone else.

When they feel inadequate

Most men engage in cheating because their partner made them feel inadequate. When they feel they are less important in their relationship or marriage, this feeling pushes them to cheat. They will seek someone who will appreciate and prioritize and make them feel like a man. They’re looking for someone that will give them the attention that their partner couldn’t give.

When you see a man that is seeking attention by all means outside his home, it shows they’ve been feeling inadequate by their partner.

Looking for attention outside of a relationship is a prominent sign of an emerging betrayal in a relationship and the reason why men cheat.” Danielle Adinolfi Sex Therapist

Some people that cheat out for pleasure choose to do so. They can not just be satisfied with one woman. As most of them used to say, why should I be eating only one food and need to have a taste of another? Cheating is a choice. Those men that are not cheating just choose not to do it. It’s also a result of self-control.

A husband cheating on his wife is not something that happens. It is a choice that the husband has made. There is no justified explanation for why men cheat. Dr. Lawanda N. Evans Counselor

Some men want to spend time alone and avoid everyday routines from home. Want to enjoy some freedom away from their boring family?

The way out from responsibilities, duties, and the specific role they have been given or adopted for themselves. This answers why men cheat.” Eva Sadowski Counselor

Men Strive for love and attention

There are reasons why men cheat but this is one of the major reasons. Men like someone that will show them love and give attention. Men cheat when the emotional connection is missing between their partners.

However, because of their busy schedule and daily routines, couples neglect to care for each other again. This has made a lot of women nag and made the house uncomfortable for the men. When they feel lonely and ignored very often, they tend to seek someone else who will listen and make them happy.

Emotionally cheating on your partner is, nonetheless, a form of cheating.” Dana Julian Sex Therapist

A man that is selfish, and does not care about the feeling of his partner, then he cheats. He just wants to satisfy himself alone no matter what. A selfish man will see every temptation as a golden opportunity to fulfill his lustful feelings.

When a selfish man is feeling trapped, he’s not happy, feeling seduced. It’s a way for him to carry out his selfish desire. Because selfishness affects commitment, destroys good behavior, and always exalts himself above others.

Most men cheat on their wives because it’s the order of the day now. They do it because of the feeling that everybody is doing it anyway.

Some men cheat because they personalize their emotions. Many say their partners did not appreciate them enough and they are working too hard to provide for the family. Because of this, they cheat.

When a man is the only one working in the family, some men use this as an advantage to cheat on their wives. They see their wives as a liability in the house and make them vulnerable.

Most men that cheat don’t have respect for their wives. This tells us that no woman should be a full housewife. We are now in the 21 century where women need to work. Men don’t have the capacity to provide for the home alone. Two are better than one.

When a woman is too troublesome, the only thing she does is fight with her husband always. This attitude alone can push a man away from the house. Every man loves and strives well in a peaceful environment. When this cannot be achieved at home, he will look for somewhere else to relax and enjoy himself before coming to the hell fire in the house.

However, many men find themselves in such a situation which makes them have an extramarital affair outside the marriage.

It is because of intimacy.

Cheating is a result of a lack of intimacy in a marriage.

Intimacy can be a challenge, but if a man is not feeling fully “seen” in his relationship or does not communicate his needs, it can leave him feeling empty, lonely, angry, and unappreciated.

He may then want to fulfill that need outside the relationship.

It’s his way of saying, “someone else sees me and my value and understands my needs, so I’m going to get what I need and want there instead.” Jake Myres Marriage and Family Therapist

Infidelity does not necessarily signal something wrong in the relationship; rather, it reflects that being in a relationship is a daily choice.” Trey Cole Psychologist

So if you don’t prioritize your man, and don’t make him feel valued, then you shouldn’t be surprised when he seeks attention elsewhere.” Steven Stewart Counselor

These are general answers from different married men from their own points of view. This will help you to know how to prevent cheating in your relationship/marriage.

When their partner has a low sex drive

When marriage is not working the way they want

She has gained too much weight

When the chemistry is gone. No more feelings for her.

Whichever the cause of your cheating, it’s not an excuse to do so. Do you know that a cheating man is on the verge of being polygamous? I am very sure no man wants to hear that his wife/girlfriend cheats on him. That house will be on fire, and those men that cheat should also think about how would they will feel when that happened.

The best way is to have better communication of your emotional needs with your partner rather than lying and cheating. The most common thing that breaks trust in a marriage or relationship is infidelity. So cheating is not good and it’s not healthy for a long-lasting relationship, stop this double game and have peace in your home.

13 Ways On How To Build Trust In Marriage/Relationship

3 thoughts on “15 Reasons Why Men Cheat On Their Partner”