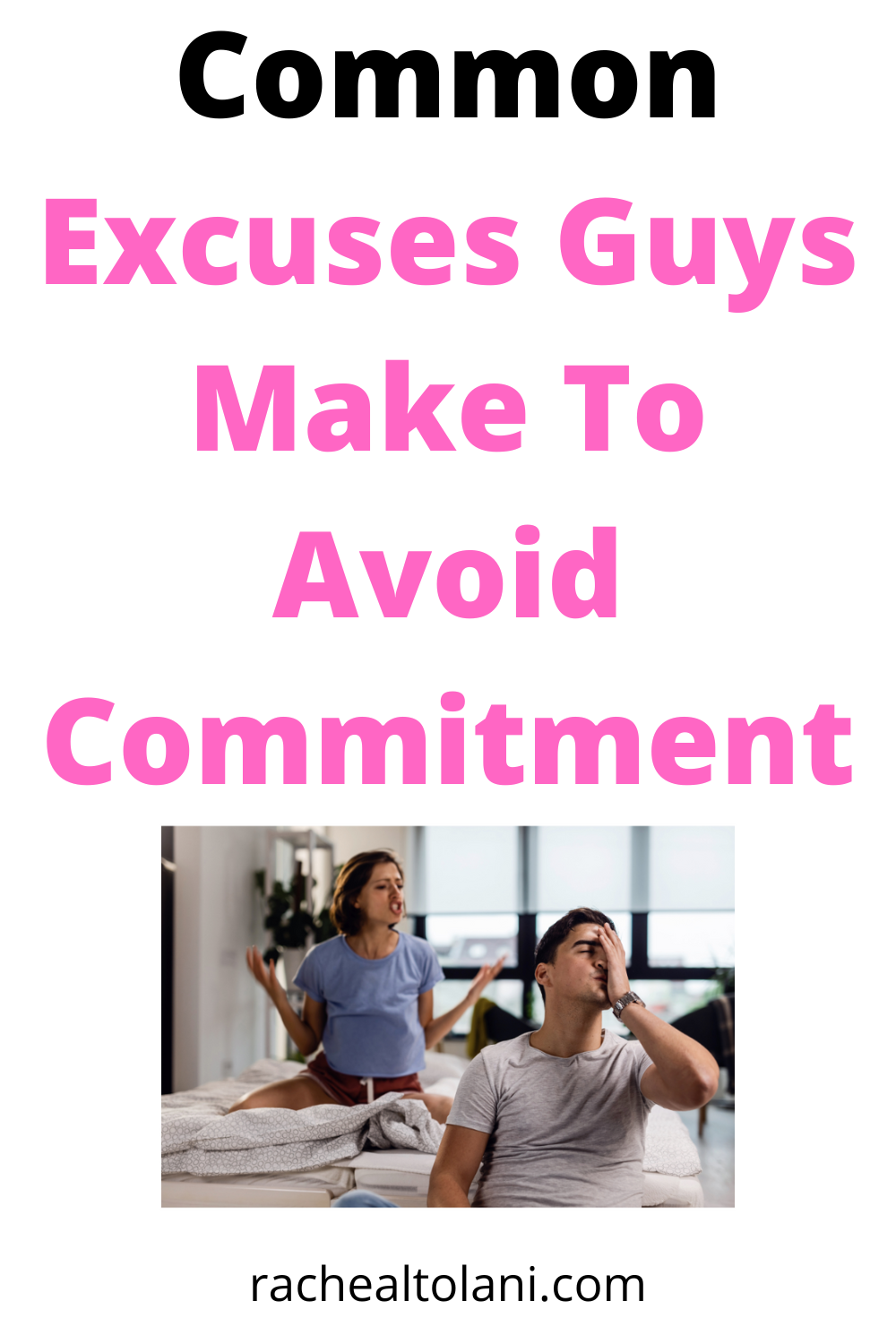 The desire of every woman is to have a loving and committed man around her. But sometimes the reverse is the case. Some guys are loving but not ready to commit. When you’re truly in deep love with a guy and his making some ridiculous excuses that you can not understand. He’s sending you a signal that he doesn’t love you. So 8 common excuses guys use to make for avoiding commitment are highly recommended.

Why do men make excuses?

There are many reasons why men make excuses. It could be they just like you but not really in love with you. There is a big difference between like and love. Some of the reasons why he does that might be genuine while some might be for other reasons known to him.

You really want to know your level in the relationship right, with all his excuses every now and then. You cannot even say if he loves you and cares for you. You can see clearly that the relationship is not moving forward because of his attitude. There is no commitment nor any sign of improvement.

Generally speaking, every reasonable man wants to be financially ok before they commit to a serious relationship. Some guys use it as an excuse even though they’re alright, that’s when they don’t love you. Though money plays a huge role in sustaining a relationship and at the same time understanding matters. Some people say money is not everything.

A guy doesn’t need to have the money of the whole world before settling down. But when he has a genuine love and mutual respect for you, no matter how little he has, he will be faithful and commit and you will be happy with him.

Looking for a job

This is another reason why some guys are not ready to commit. It can be frustrating not to be able to buy an ordinary flower for your crush. Such a guy will be thinking about how to get a job rather than committing. I can understand every guy will like to be like a man to his girlfriend. Even though in that situation some guy still commits when he’s really in love. Because your girlfriend knows you’re a potential worker and the situation is just temporary.

On the other hand, it’s a big excuse for so many guys that makes them avoid commitment.

How to tell if he loves you?

The truth of the matter is, he’s not in love with you. Because some guys are fun of excuses when the basic love to carry the relationship further is not there. Everything will just be stagnant.

When a guy is in love with you, he will do everything he needs to do and make sure is committed and you will both enjoy the relationship.

If the only thing he does is make excuses always, then you’ve seen the handwriting of where you stand in his life.

I’m not prepared for a serious relationship

This is one of the common excuses that guys make when they don’t want to commit. If you ask them, when are you going to be ready? They don’t know. You can see you’ve been hanging out with him for over 5 years and are still not ready. Those I’m not prepared type of a guy will never commit to you even if you are with him for decades.

When a guy still wants to play more, he’s the type that will be telling you, how I wish you have this particular quality. He’s just an excuse because he’s not ready for you. A guy like that doesn’t even know what he wants from a lady. He’s still on the search and flirting around.

Some may even say, you are ok but right now, I’m not prepared. When you’re hearing those excuses, it shows you’re not his choice and he doesn’t love you. That’s the only way he can make you understand his feelings.

Look, I can not promise you anything

Every lady wants to hear I love you and I promise to be faithful to you. But when he’s telling you, I cannot make any promise to you, he’s saying indirectly, let’s end the relationship. The feelings are not there and there is no need to push further. All these kinds of excuses are signs, he’s not for you.

He could be saying this because he truly knows your worth and he knows he’s not good enough for you.

Or this could be something like the good ol’, “It’s not you, it’s me,” type of excuse. Either way, he really doesn’t deserve you.

The affection is not strong enough

Sometimes a guy might like you but the affections and love that will make him commit and stay connected are not just there. He doesn’t want to settle down with you and make empty promises that he knows he can’t keep. 8 common excuses guys use to make for avoiding commitment.

You need to give me more time

When you’re with a guy not quite long and he’s asking for more time can be understandable. But you’ve known a guy for over 10 years and still want more time. If you give him the whole time in the world will never be enough. Such a guy will spend his entire life being a bachelor. Don’t wait and expect his proposal, he will never do that.

You need to think twice and look for your type. He’s not ready to commit and will never settle with anyone, his type is still a bachelor even at 90 years of age.

I can’t see us together in future

Have you been with a guy for some time and he’s telling you this as an excuse? it doesn’t worth wasting your time with him. It means there is nothing you will do that will make him commit. Since he can’t see a future with you, even right now he will never value you. You deserve a guy that will love and cherish you the way you are.

It’s all about me

When a guy suddenly starts to tell you the reason why he’s making excuses is just about me. You need to check it out because there is more to what you just heard, it’s me and not you. He knows the reason why he doesn’t want to commit and settle down. It could be his past relationship issues, his family background, personal issues that are hunting him, his typical attitude or addiction, and much more. 8 Common Excuses Guys Use To Make For Avoiding Commitment.

Still dwelling over his ex

When a guy is still busy thinking about his ex that has already moved on and is not ready to commit to you. Indeed you’re not the problem but he is the one that is not yet healed. It can be fun seeing a guy always mentioning his ex several times in your presence. When he does this all the time, it means his heart is still with his ex and he will never love you nor will he commit.

What are you doing with such a double-minded guy? His heart is with someone else and he only needs you for sympathy. 8 common excuses guys use to make for avoiding commitment

Give me some space and time

How do you feel when a guy tells you to give him space? very bad I guess. Maybe he has some problems that affect the relationship. On the other hand, some guys make that excuse when they’ve got another fresh crush. He’s playing smart because he doesn’t have time for you again. It shows he’s committed to someone else and he doesn’t love you and he doesn’t want to see your face ever again.

However, if indeed he needs time to fix his problem, if he truly loves you he might come back and search for you later. But if not, you don’t need to wait for someone who he’s not serious but just making an excuse to push you away.