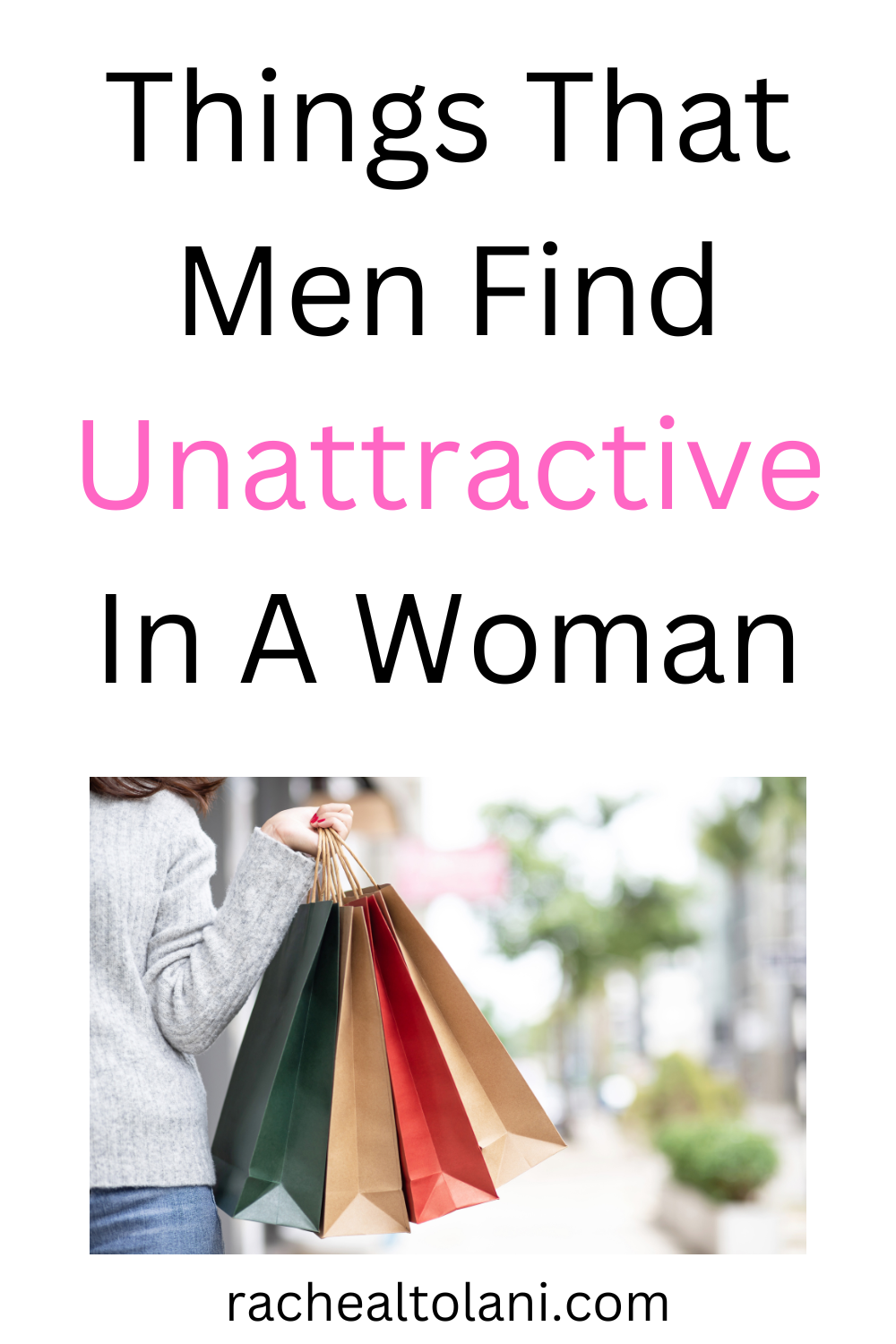 No two men are exactly alike, so it stands to reason that their opinions on what they find attractive in a woman would differ somewhat. However, there are certain qualities that most men can agree are major turn-offs. If you’re wondering what those might be, read on for a list of what men find unattractive in a woman.

Things you need to get rid off

Being a woman is hard enough without having to worry about what men find unattractive in us. We already know there are a ton of things we are supposed to do in order to be incredibly attractive to the opposite sex. But what about the things we should avoid?

Here are some of the things men find unattractive in a woman and how to fix it.

We all have our little quirks and annoying habits, but nagging is definitely one of the most unattractive things that a woman can do. Unfortunately, it’s also one of the most common. Nagging is when you constantly criticize or complain, and it’s usually about something that your partner perceives as being minor.

If you find yourself nagging your man more often than not, then it might be time to take a step back and reassess your communication style. Maybe there’s a better way to get your point across without coming across as being overly critical.

No man wants to be with a nagging woman. It’s one of the quickest ways to turn him off and make him want to leave. If you want to keep your man happy, avoid nagging him about every little thing. Therefore these 17 things that men find unattractive in a woman are an eye opener to making an amendment to such habit.

Men are visually oriented so they like their women to be put together and look good. This doesn’t mean you have to look like you just stepped out of a magazine, but you should make an effort to look your best. Also, being messy around the house is a turnoff for most men.

This one shouldn’t go without saying, but unfortunately, it’s still a common issue. A lack of personal hygiene is a major turn-off for men, so it’s important to make sure that you’re taking care of yourself.

It also means paying attention to other areas of personal hygiene, like your nails and hair. Keeping yourself well-groomed shows that you respect yourself and that you’re taking pride in your appearance. And when you look good, you feel good which is always a plus!

This one should be pretty obvious. You might think you can get away with skipping a shower every now and then, but trust me, men notice. Maintaining basic hygiene like showering regularly, wearing deodorant, and brushing your teeth is vital if you want to make a good impression and keep a man and make him more interested in you.

Try and keep your hair neat and clean.

Needy people are those who are emotionally dependent on others for their happiness. They might be clingy or always asking for validation. If you find yourself needing constant reassurance from your partner, then chances are you’re coming across as being needy.

Neediness is unattractive because it makes you look weak and insecure. Instead of relying on others for your happiness, try to focus on finding happiness within yourself. This will make you more self-sufficient and confident. These are two qualities that are very attractive to men. It’s one of the 17 things that men find unattractive in a woman. Men generally want a woman who is self-reliant.

What neediness do to you

Neediness is closely related to insecurity but it also has its own unique unattractive quality. If you are always needing reassurance or attention from your man, it’s going to get old fast. Learn to love yourself first and foremost and you won’t be as needy of his validation all the time.

Men generally want a woman who is self-reliant than follow-follow. So stop being clingy to your partner and try to be yourself. This will make him value and cherish you more.

When we first start dating someone, it’s natural to want to spend every waking moment with them. However, as time goes on, that need for constant togetherness can become stifling and suffocating. Most men eventually start looking for some breathing room, so if you’re feeling clingy, try giving your man some space. It’ll ultimately make him more likely to want to be around you when we do have free time.

A woman who is always fretting over her appearance or demanding costly gifts is not going to be seen as a catch by most men. Part of the reason for this is that it creates an air of insecurity. It makes men wonder whether or not they’ll be able to keep up with your expectations long-term.

High-maintenance women are also quite unappealing to men. Nobody likes having every little thing they do micromanage so if you’re high maintenance, try toning it down a bit.

There’s nothing less attractive than a woman with bad manners. This includes everything from being rude and ungrateful to more minor offenses like interrupting people or talking with your mouth full. If you want to make a good impression, mind your manners and be cautious about it!

We all have our own preferences and opinions, but there’s nothing less attractive than a woman who is constantly judging others for their choices or insulting people behind their backs. Instead of looking down on others, try showing some empathy and understanding. It’ll make you seem much more appealing in men’s eyes.

Try to be Dramatic

Nobody wants drama in their life, especially not men. They would much rather avoid it altogether if possible. If you are constantly starting or getting yourself involved in arguments and being always dramatic, it’s going to turn your man off quickly. This will make you lose the guy of your dream, so be wise.

Jealousy is another emotion that can quickly kill a relationship for many guys out there. If you find yourself getting jealous easily or often, try to work on squashing that feeling before it takes over. Trust is an important foundation for any relationship so if yours is built on a foundation of jealousy, it won’t be as strong as it could be.

There is a need to ask yourself some questions and be real. Because that nice guy will suddenly leave you just because of jealousy habit.

Acting dumb is a relationship killer. No man wants a woman who pretends to be dumber than she actually is. He wants someone who he can have intelligent conversations with, not someone who will sit there and agree with everything he says. So instead of playing dumb, try showing off how smart and awesome you really are. Be open and show some skills.

Materialistic women are a huge turnoff for many guys out there. Men don’t want someone who only cares about money and possessions. He wants someone who is content with what they have and appreciates the simple things in life. Too much of everything is bad, try to be realistic and contented.

Bossy women might think they’re taking charge but most guys see them as domineering and unappealing. If you tend to be bossy, try tempering it with some feminine charm, or else you run the risk of turning your man off completely. Every man likes to be in charge no matter how. Let him be the head and you will enjoy your relationship.

Difficult women are probably the least attractive of all because most guys simply don’t have the patience for them. If you’re difficult, try working on being more easygoing instead. Trust me, your man will appreciate it! Try to think about what makes you proof difficult. Is it your money, beauty, or position? name them. I’m sure you don’t want to be lonely.

Hopefully, this article gave some insight into what men find unattractive in a woman so that you can avoid those qualities! At the end of the day, just be yourself and don’t try too hard to impress anyone because chances are they’ll see right through it anyways.

While it’s true that men are visual creatures, there are actually quite a few things that they find unattractive in women. From nagging to a lack of personal hygiene, there are several things that can turn a man off quickly. But the good news is that most of these issues can be easily fixed!

By avoiding these deterrents and focusing on being the best version of yourself, you’ll be sure to attract the right man in no time!

In the end, remember that everyone is different and that there’s no guaranteed formula for what all men find attractive in a woman. The best thing you can do is simply be yourself and let your own unique traits shine through. That’s sure to attract the right man sooner or later!

20 Tips On What attracts A Man To A Woman